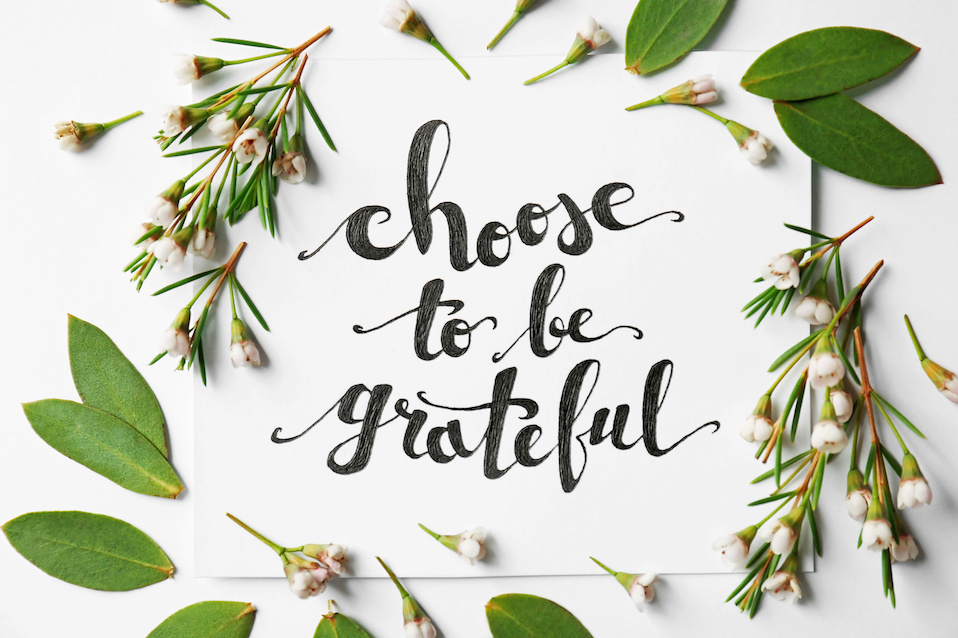 If you were asked to describe how you begin your day, are your mornings filled with rushing around, dragging kids out of bed, fumbling to find your shoes, dreading the bus ride to the city and complaining about going to a job you do not like?  For most women, the mornings are not filled with an hour of meditation, some time for reading, a quite breakfast with the family discussing their plans for the day.  Yet how we set up our day in the morning will most likely be responsible for how our day progresses.

Although we would love to start our days with peace and quiet and a cup of coffee while we sit by the fireplace, limited time robs us of the opportunity to do this. But what if there was a way to bring a positive spin into the early morning that would last through the day?

While you brush your teeth, or feed the dog, or ride on the bus, or walk into the office – give thanks.

Give thanks for the house you live in, the family that surrounds you, the people on the bus who smile at you, the change in your purse, the clothes you wear, the job you have. Give thanks for your health, your dog, the food on the table.  Thanks for your relatives, friends and co-workers.

Now it may seem improbable to be grateful when the kids are sick, you missed the bus, the boss is angry, and you’re in a rut.  And it seems almost impossible to be thankful when there is no money in the bank, the mortgage is overdue and you were passed over for that promotion. Worries about family, work and money steal your days and take away the ability to enjoy life.  Living becomes existing.

But even at these most despairing moments, you need to reach beyond the “liabilities” to find those things to add to the “asset” side of your life’s ledger.

By starting the day in this spirit, you set up your day to be prosperous and satisfying. If you start the day feeling stressed and lacking, you will have a day of stress and lack.  But if you take an inventory in your mind of your life’s assets, you will realize just what a rich woman you really are. You will see that you have much to be grateful for and that you are probably taking for granted the abundance that already exists in your life.  The world around you will give you more if you appreciate what you already have. If you sow seeds of lack, you will reap lack. But if you sow seeds of abundance you will reap more of the same.

Melody Beattie wrote in The Language of Letting it Go, “Gratitude unlocks the fullness of life. It turns what we have into enough and more. It turns denial into acceptance, chaos to order, confusion to clarity.”

Begin each day with gratitude; because if you do this every day for a month, you will simply not be the same person you are today.  By giving thanks each day for the abundance you already have in your life, you will set into motion an ancient spiritual law that says, the more you have and are grateful for, the more you will receive.

And in the spirit of the Thanksgiving holiday, I am thankful & grateful for being able to share these thoughts with you.

LEAVING MY MARRIAGE OF 23 YEARS

Last night I watched, for the bazilunth time, the movie Under the Tuscan Sun. The movie was based on the 1996 memoir of writer Frances Mayes. Knowing a woman lived this courageous story made me love the movie even more. You see, when the movie came out in 2003, I was preparing to leave my marriage of 23 years. In 2004 we separated and I spent many Friday nights on my couch with a bottle of red wine, steamed shrimp, homemade hot sauce, a chocolate eclair and this movie. Watching the heroine’s perseverance to claim her life offered me hope for a life I didn’t yet have as I let go of a life I no longer wanted. I needed hope. I needed courage.

Courage is a tricky thing. Elusive. Often disguised. Seldom easy. I never feel courageous in the midst of an act of courage. Usually it is others that say, “You are so brave.” My courage mimics stupidity. It whispers, “What was I thinking? Am I crazy? You actually think you can do this…and survive?”

In 2004 I was working part time. I had been working part time since my son was born in 1986. This was a decision my husband and I made. I left my agency job as a supervisor and began a private psychotherapy practice. This allowed me the freedom to be home if one of the kids got sick, be a chaperone on school trips and still be a professional. It worked…mostly. Money was always tight.

So, in some ways my decision to leave my marriage did seem like “not such a bright idea.” If we could barely make it together financially, how would I do it alone? (Truth be told that question probably kept me in the marriage several extra years).  I still knew I HAD TO leave. Was it courage or stupidity? I didn’t know.

I wanted a relationship with a man that was “my match.” (I wrote this request, in permanent marker, on my pillow and slept on it for 3 years) . . .

I wanted to live in Pittsburgh (I know this sounds odd, the sun rarely shines, the pot holes consume small cars, and people put chairs out on the street to save their parking place, but it is a friendly, vibrant, small city that I felt at home in).

I wanted a full-time psychotherapy practice.

I wanted to travel … often.

In the movie there is a story about train tracks being built between Austria and Italy in a section of the Alps called the Semmering. It is apparently an impossibly steep section of the mountains. The people of the area built these tracks before there was a train in existence that could make the trip. They built it because they knew someday the train would come.

So, is it courage or stupidity to risk it all for something that does not yet exist? Does one jump in, not sure you can swim, and struggle toward the thing you hope for? Or, does one ignore the inner urge to jump and sit back down?

I think it is courage and stupidity that moves us. While I was in the transition of ending a marriage, floundering, I felt stupid. That voice, those questions had some good points, “You actually think you can do this…and survive?” I jumped in anyway, willing to drown trying. I preferred that over dying in the marriage.

I didn’t drown. I inhaled a lot of water, called for help often and had to be resuscitated a few times, but I made it to the other shore. Here I am…living in Pittsburgh; remarried, last summer, to “my match”; traveling someplace wonderful every year; a successful, full time private practice and both of my kids-who I thought would hate me and never leave the area they grew up in-live in Pittsburgh.

Looking back, living the life I hoped for, I say, “I was courageous.”

So does tolerating feeling stupid.